Every day, people find themselves in the tricky situation of presenting to an audience.  Stakes are often high with not only the individual’s but also the organisation’s risk at stake.  Presentations serve a multitude of purposes: to instruct or persuade the audience, to relay (un)pleasant news, propose a course of action or perhaps help influence a major decision.  It’s therefore no surprise that pre-service learners of English are often required to complete presentation training classes in English.  I found myself teaching presentation skills on a logistics course at a university this semester where I had previously only taught academic writing.  Although I have plenty of experience in presentation training, working with people already in employment is very different to teaching the same skill to a group of 20-year-old university students!  I tried out a variety of activities with them aimed at exposing learners to a range of techniques and language strategies, as well as offering them enough variety to keep them motivated over 12 weeks of the semester.  Here’s a selection of ideas that might give you some inspiration if you’re teaching presentation skills soon.

Who am I?  Language focus: structure and signposting in basic presentations

Participants were given ten minutes to present something simple about themselves to the rest of the class.  This could be a short presentation of their job or studies, a skill or talent they have, something they’re interested in or something they’ve learned.  This was a nice, simple introduction to the course, as well as for both me and the participants to get to know each other.

Lots of people need to describe how something works.  It could be a process, a machine, a system or a task.  I began by eliciting the right nouns and verbs involved, as well as sequencing language (firstly, then, finally).  The learners then researched a process and presented it in teams.  We had google glass, voice recognition software, the ageing process (!), studying at university and filling your car up with petrol. 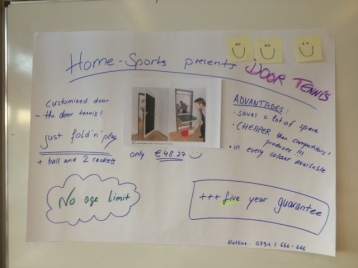 This task allows learners to repeat a short presentation again and again, becoming increasingly confident and enthusiastic.  In pairs I asked my learners to invent a new product, and then create a poster illustrating what it is, how it works, and what the benefits are to the customer.  They were then given 5 minutes to sell their idea to another pair.  Learners circulated, alternately giving their presentations and listening to others, before voting on the winner. 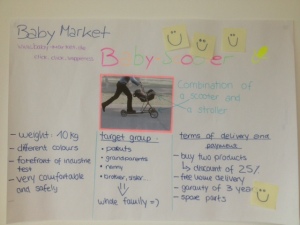 This was a simple topic to set up.  Groups were give a role, for or against, and were then given topics to debate with another team.  We had practiced how to deal with questions, first using Bob Dignen’s RACER model (respond, answer, clarify, encourage, and return), and then using contrasting language when questions were directed which challenged the group’s position (whereas I agree, although you have a point…)

This task took place after a lesson on CV/resume writing.  Half the learners were appointed to conduct interviews (As), the other half we to be interviewed (Bs).  Everyone received a job description.  A’s prepared a series of questions for their interview candidates, B’s prepared how they could relate their work experience and qualities to meet the requirements of the job.  Each interviewer then met three candidates, before appointing one, who was put through to a second round of interviews.  Finally one class member was appointed the job!

Participants brainstormed the major stories being reported in the press at the time.  Each group was allocated one story.  The objective was for them to them present the story in more detail, including background to the event and a hypothesis of its potential consequences.  They concluded by suggesting who had been most affected by the news and how, as well as the possible consequences on the world of business. 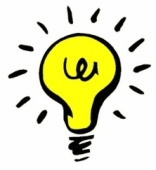 We practiced 5 minute presentations on a topic of their choice, but whereas they could use PowerPoint slides, they were only allowed to show pictures.  One very tricky element of presenting is the ability to speak freely, and text on PowerPoint slides often acts as a crutch.  This practice helped learners appreciate that they can speak freely and that pictures are enough of a support to get them through the presentation.

The language trip of a lifetime – language focus: convincing and persuading

Groups were asked to present a plan of where the whole group could go on a language course abroad.  We ruled out the normal favourites: UK, Ireland, USA, Australia, New Zealand, Canada, as these would be too predictable.  They were given a number of factors to consider and then had to convince their class members that their plan was the most interesting, while also being the most productive way to spend the budget.  You can find my lesson plan on how we carried out this presentation project here – feel free to use it!

If you’re looking forward to a semester of academic presentation practice soon, or you’re just looking for a few ideas for lighthearted practice of this skill, you’re very welcome to try out any of these ideas. I’d love to hear how they go!

What I’ve been up to

What you have to say

My Tweets
English for Business

Decentralised Teaching and Learning
Get them talking

...it's what we humans were imagineered for...

Thoughts, rants and ramblings on the teaching of English as a Foreign Language

Learning from each other, leveraging the differences, doing better business.

Reflections of an English Language Teacher

Classroom materials and teaching tips from TEFL lifer Alex Case. See the drop-down menus under the photo for thousands of photocopiables and articles, and for how to support TEFLtastic

A Blog About Education

Oh God, My Wife Is German.

The Misadventures of an American Expat and His Wife in Germany

...and other things I'm not so sure about

Still Standing - Careering Into My Seventies